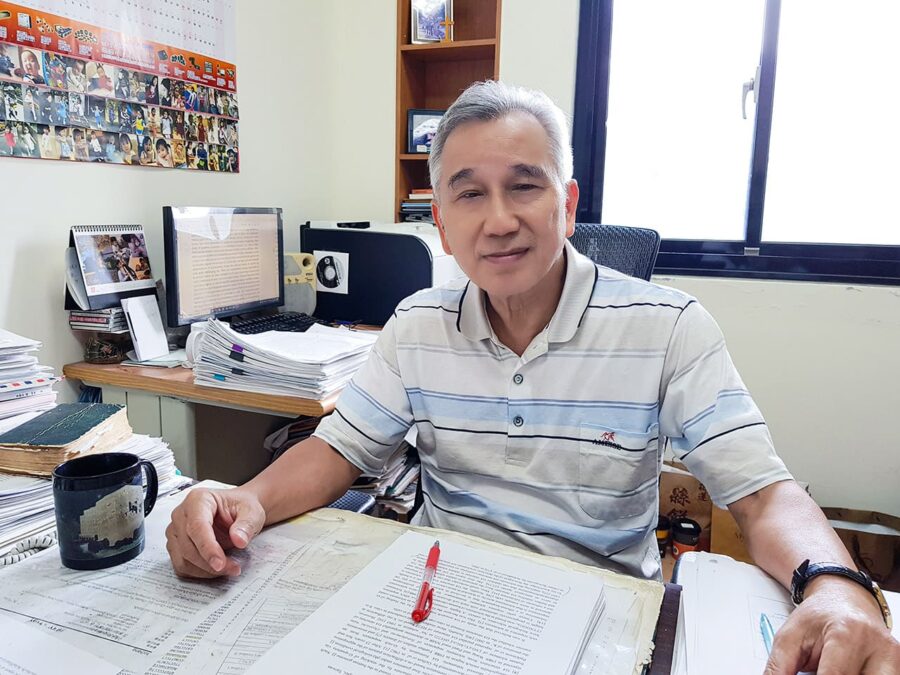 Dr. Chang’s group has focused on guanine-quadruplex (G4) DNA, particularly (1) the NMR study of conformational change of G4 DNA [1]; (2) imaging study of o-BMVC foci for G4 DNA in cells [2,3]; and (3) the study of G4 ligands [4,5]. G4 DNA has been associated with genome instability, genetic diseases, and cancer progression.
Time-dependent imino proton NMR spectra revealed an intermediate G4(I) state during the structural transition from a hairpin structure to a hybrid G4(II) structure of a G-rich sequence derived from the WNT1 promoter region after the addition of K+ [1]. It is surprising that an atypical G4 structure could act as an intermediate state in the conformational change from a hairpin structure to a typical hybrid G4 structure, introducing a new possible scenario in the G4 folding pathway. In addition, cytosine modification by methylation and demethylation shows significant differences in terms of structural population between G4(I) and G4(II) (Fig. 1). A four-state transition model is applied to describe such conformational changes, highlighting the fact that the underlying G4 structural selection is linked to the difference in hydrogen bonding in the loop configuration. This is the first example of the effect of cytosine methylation/demethylation modification causing significant differences in terms of structural population between these two G4 structures, which may be involved in epigenetic regulation via different cytosine modifications.
Identification of the existence of G-quadruplex (G4) structures from a specific G-rich sequence in cells is critical to the study of structural biology and drug development. Using antisense oligonucleotides, (CCCTAA)3CCCTA, the decrease of the number of o-BMVC foci in time-gated fluorescence lifetime imaging microscopy (FLIM) images provided convincing specific evidence for the existence of telomeric G4 structures in fixed cells and end-of-metaphase chromosomes [2]. In addition, the previous finding, i.e., that there are more o-BMVC foci in cancer cells than in normal cells, indicates the potential of o-BMVC foci as a common biomarker for the study of cancer and its diagnosis. In a study on 327 fine-needle aspiration samples of thyroid nodules from the National Taiwan University (NTU) Hospital [3], o-BMVC testing allowed the discrimination of otherwise indeterminate cytology results into benign or malignant cases (Fig. 2), which can reduce diagnostic uncertainty and benefit clinical decision making. This pioneering study strongly suggests that o-BMVC testing shows great promise for the diagnosis of thyroid nodules and possibly other cancers.
Previously, a simple method was introduced to screen G4 binding ligands based on changes in fluorescence intensity. Specifically, the decrease in the number of o-BMVC foci in HeLa cells pretreated with the G4 ligands TMPyP4, BRACO19, and BMVC4 was found to be due to their direct binding to G4 DNA in cells, which prevents the subsequent binding of o-BMVC to G4s. This method was critical for screening therapeutic G4 ligands because the binding target was identified in cells. Recently, Yang et al. [4] used BMVC to establish a high-throughput, large-scale custom G4 DNA microarray to assess the binding selectivities of proteins and small molecules. In addition, Sugimoto et al. [5] have correlated the replication of DNA containing human telomeric G4 and G4 stability based on the topology-dependent binding manner of G4 ligands, including our molecule BMVC-8C3O. The results indicate that both G4 stability and the efficiency of G4 replication for a particular topology should be considered in the development of G4 ligands. We have collaborated with J.J. Lin at the NTU Hospital and found that BMVC-8C3O is a potential anticancer drug. Figure 3 shows the conformational changes for different G-rich sequences induced by BMVC-8C3O. 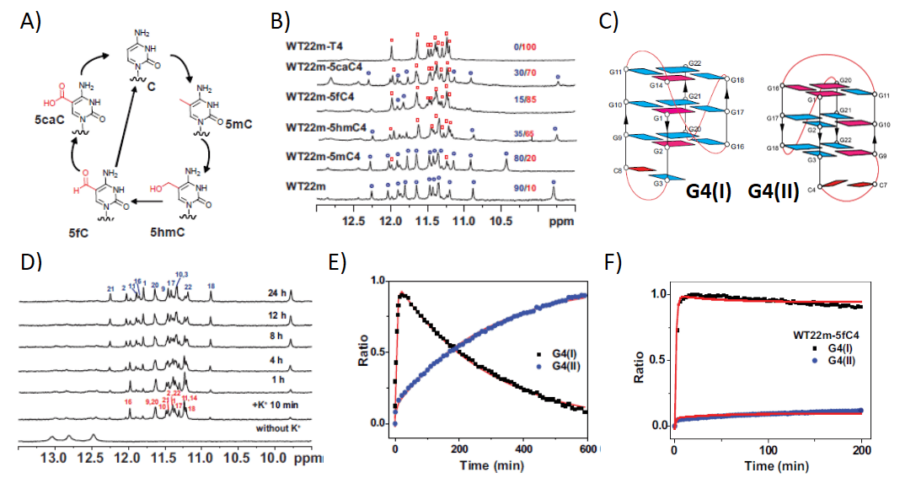