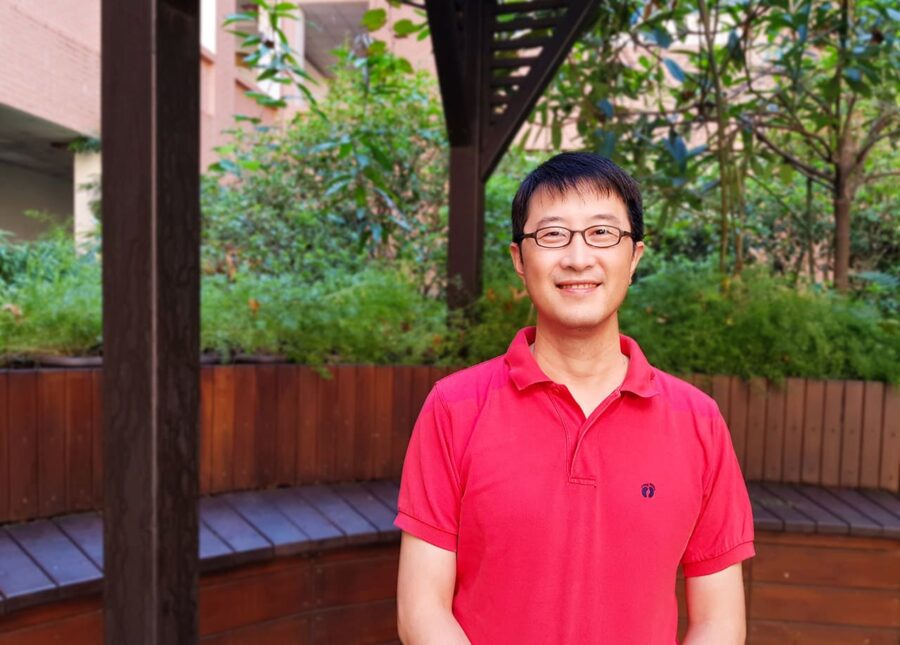 The concept of potential energy surfaces (PESs) plays an essential role in molecular systems. Minima on PESs are associated with stable structures, and a given minimum harmonic frequency derived from the curvature is the starting point to understanding the vibrational spectroscopy of such structures. Thanks to the rapid development of electronic structure theories in the last few decades, it has become routine for chemists to compute PESs using first-principle methods. Our research interests concern the development of methodologies to link information derived from PESs with experimental observables such as IR and Raman spectroscopy. In attempting to bridge such a fundamental gap, our research efforts are devoted to developing theoretical and computational methodologies for exploring the vast conformational space of molecular systems and understanding their diverse vibrational Hamiltonians beneath the experimentally observed spectra.

Through collaboration with Prof. Fujii of Tohoku University in Japan, we have examined the IR spectra for a series of asymmetric proton-bound dimers with protonated trimethylamine (TMA-H+) as the proton donor. The frequency of the N–H+ stretching mode is expected to red shift as the proton affinity of the proton acceptor increases. The observed band, shown on the right, reveals a peculiar splitting of approximately 300 cm−1 with the intensity-shifting pattern resembling a two-level system. Numerical simulations using our in-house ab initio anharmonic algorithms not only reproduce experimental spectra without any empirical parameters. We have also developed a theoretical model that leads to the conclusion that the observed band splitting and its extraordinarily large gap of around 300 cm−1 is a result of strong coupling between the fundamental of the proton stretching mode and overtone states of the two proton bending modes, i.e., Fermi resonance (FR). We have also formulated a general theoretical model to link the strong FR coupling to the quasi-two-level system. Since the model does not depend on the molecular specification of TMA-H+, the strong coupling we observe is an intrinsic property associated with proton motions.

FR for aromatic NH groups has a different pattern. From the spectra of vibrational spectra of neutral 1:1 clusters of 2-pyridone (2PY) with water, ammonia, and other hydrogen-bond-forming molecules, complex vibrational signatures associated with N–H stretching fundamental at 3 μm are often observed. An example of 2PY…Me2O

is reproduced in the figure shown above as a function of the harmonic frequency (in wavenumbers). Several anharmonic coupling schemes have been proposed; however, the origin of these commonly seen complex features remains unclear. In a recent paper ( J. Phys. Chem. A 125, 7489 (2021)), we presented our theoretical analysis of the structure and vibrational spectra of these clusters using ab initio random search and ab initio anharmonic algorithms, respectively. We demonstrated that the same FR, coupling between NH stretching modes, and overtone/combinations of skeleton modes of 2PY can lead to different complex vibrational signatures being observed experimentally. Since this vibrational coupling scheme is inherent to cis-amides with adjacent N–H and C═O groups when a hydrogen bond is formed with 2PY as the donor and acceptor, we believe that such a phenomenon is general to other hydrogen-bonding systems with the same functional groups. 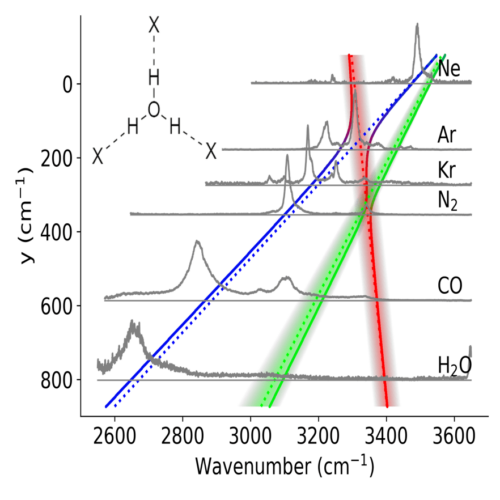 Complex vibrational features of solvated hydronium ions, H3O+, at 3 μm are also well known. The origin of these vibrational features has been a matter of constant and activate debate. Using the algorithm we developed, these vibrational features enable us to look into the vibrational coupling among O–H stretching modes and other degrees of freedom. Two anharmonic coupling schemes have often been employed to explain observed spectra: coupling with the OH bending overtone, known as FR, has been proposed to account for the splitting of the OH stretch band at ~3300 cm−1 in H3O+···Ar3, but an additional peak in H3O+···(N2)3 in the similar frequency region has been assigned to a combination band (CB) with low-frequency intermolecular stretches. While even stronger vibrational coupling is expected for H3O+···(H2O)3, such pronounced peaks are not observed. Using ab initio anharmonic algorithms, we were able to assign the observed complex spectral features, to resolve seemingly contradictory notions in the interpretations, and to reveal simple representations of the interplay between FR and CB, as illustrated in the figure shown above as a function of frequency (in wavenumbers).